In THE UNITED STATES, TWO LAWS FOR SAME CRIME
By Raveendran Narayanan 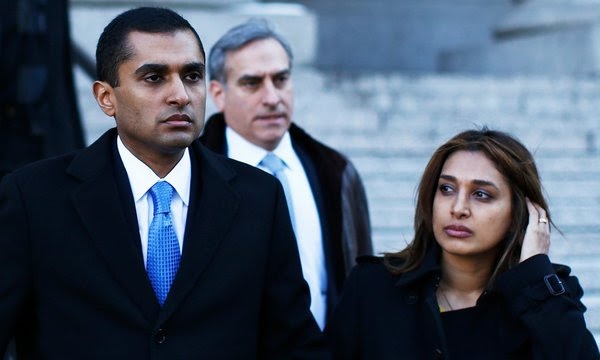 Mathew Martoma and his wife, Rosemary, outside the courthouse on Thursday in Manhattan.EDUARDO MUNOZ/REUTERS

hen in the Course of human events it becomes necessary for one people to dissolve the political bands which have connected them with another and to assume among the powers of the earth, the separate and equal station to which the Laws of Nature and of Nature’s God entitle them, a decent respect to the opinions of mankind requires that they should declare the causes which impel them to the separation.

We hold these truths to be self-evident, that all men are created equal, that they are endowed by their Creator with certain unalienable Rights, that among these are Life, Liberty and the pursuit of Happiness. — That to secure these rights, Governments are instituted among Men, deriving their just powers from the consent of the governed, — That whenever any Form of Government becomes destructive of these ends, it is the Right of the People to alter or to abolish it, and to institute new Government, laying its foundation on such principles and organizing its powers in such form, as to them shall seem most likely to effect their Safety and Happiness.( The Declaration of Independence, 110 th Congress 1st session/House Document 110 -51).

Mathew Martoma had been on his way to being another American success story. Today, he is the eighth person who once worked for the hedge fund titan Steven A. Cohen to be convicted of insider trading.

A federal jury in Manhattan on Thursday found Mr. Martoma guilty of seeking out confidential information related to a clinical trial for an experimental drug for Alzheimer’s disease — information that enabled Mr. Cohen’s SAC Capital Advisors to earn $275 million.

The son of immigrant parents from India, Mr. Martoma, 39, graduated from Duke, attended Harvard Law School and earned  M.B.A. from Stanford Business School before he landed a job as portfolio manager at SAC, one of the most successful hedge funds in the world.

Now, Mr. Martoma is expected to receive a sentence of seven to 10 years in prison, legal experts said. As a guilty verdict on two counts of securities fraud and one count of conspiracy was read in the courtroom in Lower Manhattan, Mr. Martoma’s wife, Rosemary, a pediatrician, cried, while he sat stone-faced. “We’re very disappointed and we plan to appeal,” said Richard Strassberg, a lawyer for Mr. Martoma

For Mr. Cohen, meanwhile, it is business as usual, albeit on a somewhat reduced scale. He is moving ahead with plans to convert his 22-year-old firm into a family office that will manage no outside money, just his $9 billion in personal wealth. The firm will still employ more than 800 people and maintain offices in several cities.

The case against Mr. Martoma was notable because it was the first time that Mr. Cohen was linked to questionable trades at his firm. The two men had a 20-minute phone conversation on July 20, 2008, the day before SAC began selling two drug stocks. For more than two years, federal prosecutors and agents with the Federal Bureau of Investigation pressed Mr. Martoma to cooperate and tell them what he and Mr. Cohen had discussed. 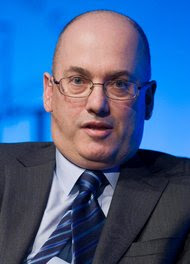 Steven A. Cohen, the founder of SAC Capital, was not charged.

WHEN SAC WAS INDICTED LAST SUMMER, FEDERAL PROSECUTORS CALLED THE ONETIME $14 BILLION FIRM A BREEDING GROUND FOR INSIDE TRADING ACTIVITY AND A “VERITABLE MAGNET FOR MARKET CHEATERS.” AND FEDERAL AUTHORITIES HAVE SAID THEY ARE CONTINUING TO INVESTIGATE ACCUSATIONS OF INSIDER TRADING IN SEVERAL OTHER STOCKS SAC TRADED.

THAT IS DOUBLE STANDARD  AND  PARTIALITY TO AN ASIAN  INDIAN AMERICAN.

But there are no pending criminal cases against any former or current SAC employees. (The firm agreed in November to plead guilty to insider trading violations and pay a $1.2 billion penalty.) And prosecutors are not close to bringing any charges against Mr. Cohen, according to a person briefed on the investigation, who spoke anonymously because he was not authorized to speak publicly about it.

Still, Mr. Cohen faces a civil action over an administrative failure to supervise charge filed by the Securities and Exchange commission, which arises largely from the insider trading charges on which Mr. Martoma was convicted.

“Cohen built fire walls between him and the illegal action that so far have protected him from criminal proceedings,” said Erik Gordon, a University of Michigan  business professor.

Until his arrest in November 2012, Mr. Martoma had seemingly checked off all the boxes on the path to success. At SAC, he earned a $9.3 million bonus in 2008, which enabled him and his wife to buy a $1.9 million home in Boca Raton, Fla., for themselves and their three young children.

During  July 2008, two doctors prepared agreement with him to buy and sell shares  with confidential information about problems with a clinical trial for an experimental Alzheimer’s drug being developed by Elan and Wyeth, two pharmaceutical companies. SAC had amassed $700 million worth of shares in the two companies, based largely on Mr. Martoma’s recommendation. Mean time, the details of these were published in the internet and many e-mails were send to many companies by these Doctors for selling shares of the medicine. Doctor Gill man (81) was  changing positions from 2006 to 2013. Prosecutors initially alleged one doctor, identified in a corresponding case brought by the U.S. Securities and Exchange Commission as the neurologist Sidney Gilman, formed a close relationship with Martoma and shared with him non-public information he obtained while supervising part of the trail. Gilman corp-orated with prosecutors and agreed to pay a $186,781 disgorgement, no jail term, means partiality & double standard in many cases in the UNITED STATES.

The filing did not name the second doctor or the expert networking firm through which Martoma met him. The firm that connected Martoma and Gilman was Gerson Lehman Group.

The filing described GLG as an “expert net working firm,” while it described the firm that introduced Martoma to the second doctor as “a financial services firm that provided expert networking service to SAC hedge fund

After a secret meeting on July 19, 2008, with one of those doctors, who had disclosed the final results of the trial, Mr. Martoma called Mr. Cohen at his home on a Sunday, prosecutors said. The very next day, at Mr. Cohen’s instructions, the hedge fund began selling those stocks.

The jury convicted Mr. Martoma of charges that he used that inside information to recommend that SAC liquidate its position in those stocks.

Even though prosecutors introduced evidence that he played an instrumental role in the selling of those stocks over four days, Mr. Cohen was not charged with wrong doing.

The sales enabled SAC to avoid losses and generate profits totaling $275 million by the time the drug companies publicly announced the results of the clinical trial on July 30, 2008.

Dr. Sidney Gilman, a former University of Michigan medical professor and an expert in brain diseases, who provided Mr. Martoma with those final clinical trial results, testified that an F.B.I. agent told him in September 2011 that the real target of the investigation was Mr. Cohen.

“I am just a grain of sand, as is Mr. Martoma,” Dr. Gilman recalled the F.B.I. agent telling him.

Mr. Martoma’s lawyers sought to undermine the credibility of Dr. Gilman, while also raising questions about whether the information the doctor said he had passed on to Mr. Martoma was in fact secret.

About the Alzimiers drugs, every thing is available in  the Government web sites: 1,750,000 shars, 224 Traders, 350 Consultants. Test results of Alzimiers drugs came in Scientific Journels. Every thing is available in Government Register. Dr. Imbre knows the results of Tosbyba & ABC News Medicen to public. Confidentiality?  Every thig is distraction.

The conviction of Mr. Martoma adds to the perfect record of the United States attorney’s office in Manhattan in prosecuting insider trading cases in the hedge fund industry. The office has now secured 79 convictions or guilty pleas since the current crack down began with the October 2009 arrest of the Galleon Group founder Raj Rajaratnam, who was convicted of 14 counts of securities fraud and conspiracy in May 2011.

Through out the trial, Mr. Martoma sat next to his lawyer, quietly taking notes. His calm demeanor was a stark contrast to his reaction when F.B.I. agents first approached him in 2011 to tell him they were investigating him for insider trading and wanted him to cooperate. Mr. Martoma briefly fainted and then refused to cooperate with the authorities.

The judge, Paul G. Gardephe of United States District Court in Manhattan, did not immediately set a sentencing date for Mr. Martoma, who has been free on $5 Million (Dollars Five million) bail since his arrest.

The defense Attorneys argued that ” absolutely nothing improper ”  because this is internate age and everything is open to all.

The jury of seven women and five men,  12 + 4 Reserve,  which included the chief executive of a shoe and accessory company, a New York University professor and a lawyer, reached a verdict after a little more than two days of deliberations. According to ethnicity of Jurors 11 Whites and One African American. Why don’t select three or four Asian American Jurors? Isn’t it  intentionally selected 11 White Jurors to charge Mathew Martoma?

I am calling all Asian Indian American Leaders including JUSTICE FOR ALL AMERICA Inc, (JFA, Inc) Chairman, Mr.THOMAS KOOVALLOOR, to come forward and help a brother beyond relegious factions to ask for a reduced charges, a fine, like other Investment Bank Ececutives. Investment Mangers and Hedge Fund Mangers are freely roaming in American Cities to make another Financilal melt down like 2008. They will even try to destroy your eye vision to make more profit. I am a crime victim of this type of tactics.

The public was knowing the side effects of the medicine from April 2006 to 2008. News in ELA CORPORATION, SUMMER STREET News and CREDIT SAUCE. Dr. Gilman also consulted to his clients, all information is public. CARVEY DAVIS SHOW – Public. Dr. Laou also testified that the value of medice – no good, not usefull. Many e-mails to many Doctors about the medine. test results and secret letters to many, Why charging Mathew Martoma?

Round table discusion by Dr. Gilman at GOG nothing usuall, nothing unusuall. There was no special information from any boady, publically discused items., SAC – fines $5 Million, Possession of the drug for 25 years. Federal criminal offences by Dr. Gilman. Dr. Gilman leaked the e-mails (Power point presentation). Now not sure, he forget. No recollection ( not remembering) from February 12, 2012 to February 02, 2014, 707 Times.

The prosecution did not proved, they failed. presented a car parking ticket for two hours. Then he is flyimg to Seattle with in 1/2 hours to Seattle, but 45 minuites drive. Contraducting evidents, easily provable lies.

In UNITED STATES OF AMERICA, two types of verdict for same type of crime must be stopped immediatly by Presidential Orders

This site uses Akismet to reduce spam. Learn how your comment data is processed.